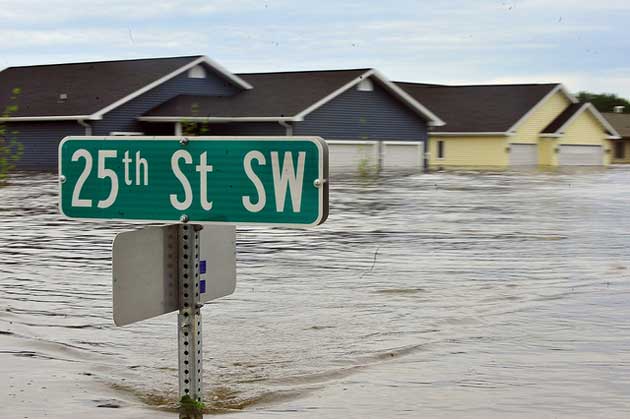 Flood Insurance Can Save You Thousands

According to the National Flood Insurance Program (NFIP), floods are the top natural disaster in the U.S. Between 2010 and 2014, the average flood claim was over $40,000. Can you imagine? If your home or business were to flood, it could potentially cost you tens of thousands of dollars to repair. Most of us just don’t have the kind of money to cover that high of a bill – and yet when it’s your home, you have no choice. You must either repair the damages, or find a new home. But with flood insurance, the cost of repairs becomes much more manageable.

NFIP is a federally run flood insurance program that offers two different plans: one that covers up to $250,000 in home or property damages, and the other that covers up to $100,000 in personal belongings damages. You can enroll in one or both policies for maximum coverage.

If you need more coverage, there are always privately run insurance companies that can provide you with a separate policy for flooding. Keep in mind, however, that most flood insurance plans have a 30 day waiting period – meaning that you cannot make any flood claims until 30 days after you’ve signed up. So if your home is damaged 28 days after you signed the policy, you won’t get coverage.

How Much Will Flood Insurance Cost Me?

The cost of flood insurance in San Diego really depends on the company you choose and the policy you select. If you were to go for the maximum coverage options from NFIP, you can expect to pay a total of $615 in annual premiums. If you’re interested in only insuring a small portion of your belongings, or you don’t expect your home to completely flood, then you can enroll in one of the lower coverage tiers from NFIP. To get $20,000 in property damage coverage and $8,000 in personal belongings coverage, you can expect to pay about $200 in annual premiums. These prices change depending on your home’s layout, however, particularly if you have a basement.

You can check your home’s flood risk using the NFIP FloodSmart website. By entering your address, you’ll receive a flood risk rating as well as various insurance pricing estimates.

Is Flood Insurance in San Diego Worth It?

So, is flood insurance in San Diego worth it? For much of the county, Absolutely. At TSC Restoration, we have seen firsthand just how devastating flood damage can be. For many homeowners who neglected to invest in a policy that covers flooding, paying for damages out of pocket can be a challenge at best. You won’t regret purchasing flood insurance when you come home to a flooded house and $40,000 worth of damages. And at $600 a year, the peace of mind is really worth every penny.

If your home has already experienced flood damage and you own a flood insurance policy, then you’re in the right place. Our team has a rock solid track record of working with insurance carriers during the flood restoration process.