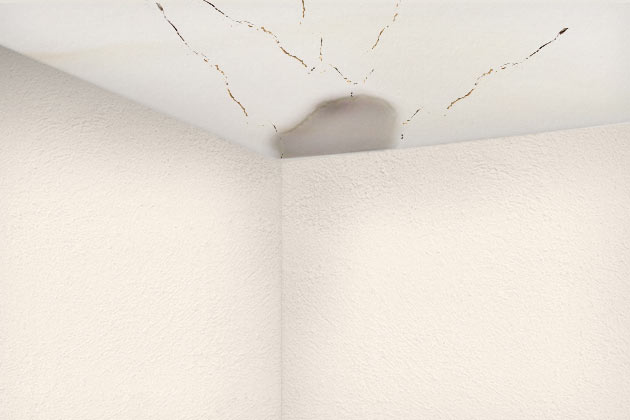 It starts with a small stain, then quickly turns into a huge unsightly bubble. If left untreated, that patch of water damaged ceiling will turn into a bigger mess.

Water damaged ceilings can weaken your house’s foundation and can even be a threat to your health because of mold growth.

But don’t worry! You can prevent that from happening by repairing the damaged part as soon as possible. Here’s how to get it done:

Look for the source

The first thing that you should do is to find the source of the leak. How do you that? By looking for certain clues. The weather, for one, will clue you in regarding the location of leak.

For example, if the leak happens only when it’s raining or snowing, the source could either be a clogged gutter, cracked shingles, or an ice dam build up.

A water damaged ceiling that continues to worsen even during dry months is most probably due to a busted pipe.

Either way, it’ll be useless to fix a water damaged ceiling without patching up the source of the leak first. You’ll just end up shelling out more money in the long run.

Once the source has been fixed, the next step is to prep the area for repair. Make sure that you have your safety goggles, gloves, and mask on.

Protect the area directly below the water damaged ceiling by placing a plastic tarp and a bucket above the plastic tarp if you need to drain a bowed ceiling.

If the area has bulged out, it means that there’s water pooling above it. Carefully poke it with a screwdriver.

If the damaged part has bowed between the ceiling’s joists due to too much water, then it would be wise to just remove it. Do this by using a wrecking bar.

Make sure the entire area is completely dry and that any mold growth has been treated before you start the repair.

Use fans to speed up the process. Leave the windows and doors open for better air circulation as well.

For spot treatments, start by scraping off the paint on the affected area. After that, spray the area with a primer. Allow it to dry before putting a fresh coat of paint.

For bigger damages, you need to saw off the area, and then use a fine grit sandpaper to remove all signs of sharp edges and bumps before patching it up. You can use the existing lath to key the patch into. As for the finishing coat, a regular joint compound will do.

For complete replacement, place a new sheet of wallboard over the area that has been prepped. If you’re having a hard time propping it up, secure it with temporary furring strips before putting the ceiling screws.

Cover the seams with a drywall tape before applying a joint compound. Once the joint compound is completely dry, smoothen it out with sandpaper. Apply a primer and let it dry, and then cover it with the same paint color as the rest.

Keep in mind that not all affected areas need to be removed. However, this should be examined by a professional first. Some of the factors that will be considered for this are the following:

The key here is to act quickly before the problem worsens. Remember that it’s always cheaper to treat water damaged ceilings when the problem has just started.